Those of you saw my review of Anne Goodwin‘s debut novel Sugar and Snails will be delighted to read the following guest post from Anne on how much of her real self is contained within her novel. I find it a fascinating subject myself, as I know my own novels are strange conglomerations of true, hypothetically true, and utterly fanciful, with the reader (hopefully) never being certain which is which. I’ve been toying with this a lot in my third novel, The Other Three of Us, the first part of which comes out next week, and I’ll admit it can be a bit frightening. My story is actually told from the point of view of the author, which essentially invites the reader to assume that it’s autobiographical even when it’s not. Anne, too, has taken a brave step here in writing about a character whom many readers will assume represents Anne herself. This is the risk we take with fiction, and Sugar and Snails has done it amazingly well. 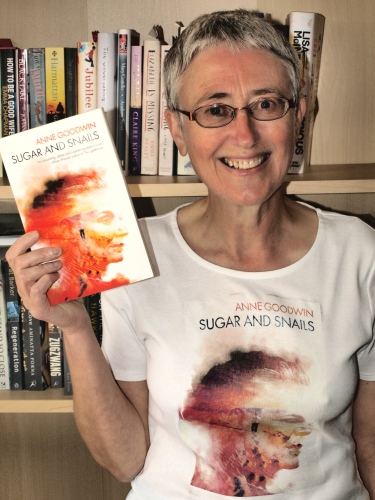 Apparently, most first novels are thought to be autobiographical, so I’m anticipating some fun when my readers start wondering how much of my character Diana’s life overlaps with mine. Fun because there’s an interesting secret at the heart of her identity that might make friends and acquaintances look at me in a different light.

When my husband read a proof copy a couple of months before publication, having lived with the story for the past seven years but, until then, never having read a word, he also wondered whether people would think it autobiographical. I asked whether he’d mind. After giving it some thought, he told me he wouldn’t because people would think he was Simon (Diana’s not-quite-partner) and Simon’s a decent guy.

It’s the fact that Diana’s story isn’t mine that gives me the freedom to tell it. I’ve no desire to open up the events of my own life to public scrutiny; nor do I have the capacity to write an autobiography or memoir in an engaging way. But, in writing about a character on a very different trajectory to my own, I’ve drawn deeply on my own experience. Diana isn’t me, but I’ve written her as if she could be. She’s an alternative version of me.

The best response I’ve come across to that awkward question, Is it autobiographical? (although, unfortunately, I can’t remember from where I’ve stolen it) is No, but it is personal. I’m very attached to this fictional alter ego of mine, very protective of her. Although I’m aware that, because of her anxiety about her secret, she can be irritating, I’ve found myself getting defensive when anyone criticises how she behaves. Well-intentioned (and useful) feedback from peer reviewers, especially in the early stages when I was just getting to know her, could be challenging. Why couldn’t they accept her as she was?

Most writers are personally involved in their characters at some level, but perhaps this felt particularly difficult for Diana (and me) because her journey towards self-acceptance is largely what the novel’s about. She fears that her friends (including decent-guy, Simon) will desert her if they discover who she really is. Of course, as her creator, I’m going to be sensitive to any hints of rejection.

While I don’t share the exact details of her biography, I do identify with her emotional experience, and it’s this that particularly interests me as a writer. I too have felt inadequate, ashamed of being me. I too have wished I could scrub out my old life and start again. I too have felt a yawning gap between how I see myself and how I feel I ought to be. Perhaps you’ve experienced this too?

Reflecting on this emotional connection, I wonder what people mean when they ask if a novel is autobiographical. Are they looking for a merging of author and character in terms of life events or life themes? The more I think about it, the less I comprehend what the question means. Perhaps, should anyone ask, I’ll pass the question back to them the way that therapists are prone to do, What do you think?

Reading through my novel for the final time before publication, checking for any errors that had escaped the notice of editors and proof-reader, I was surprised to come across the odd scene I’d borrowed from my own life. Not the big events, but small things, slightly tweaked to fit the story. Why should I be surprised when it was me who had put them there? As crazy as this might sound, it feels as if, having given those minor incidents to Diana, they no longer belonged to me. Hoping readers would discover connections between Diana’s life and their own, I didn’t expect that I’d discover them too.

Ever since I’ve been writing fiction seriously, I’ve been aware of the fuzzy boundary between fiction and real life. The moment someone asks me if Sugar and Snails is autobiographical, it’s going to get a lot fuzzier still.

Anne Goodwin writes fiction, short and long, and blogs about reading and writing, with a peppering of psychology. Her debut novel, Sugar and Snails, was published last month by Inspired Quill. Catch up on her website: annethology or on Twitter @Annecdotist.

Want to read more of Anne’s guest posts regarding her novel? Visit other stops on her month-long blog tour:

21 thoughts on “Is it Autobiographical? A Guest Post by Anne Goodwin on the Reality and Fiction of Her Debut Novel Sugar and Snails”