Last week I finished reading Anne Goodwin‘s debut novel Sugar and Snails. While I have been a fan of Goodwin’s writing for some time, it’s difficult to anticipate whether someone who writes wonderful short stories will also have the skills required to assemble a novel. Goodwin most definitely does. I highly recommend that you give her novel a try – you will not be disappointed. 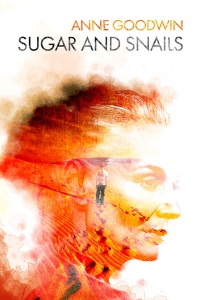 Below is the five-star review I am posting on Amazon and Goodreads:

A coming-of-age story unlike many others

I picked up Sugar and Snails without having any idea what it was about (details below under the Spoiler Alert), and I have to say that I was delightfully surprised by both the storyline and the style of writing. I loved the way the author slowly unravels the story behind the youthful Diana’s mysterious life-changing decision, picking away it, probing her memory and subconscious for details, just like the psychologist her main character portrays. It’s a classic example of form fitting function, and it drew me deeply into the story even as I was drawn more and more deeply into the depths of Diana’s mind.

The writing is smooth and expertly done, with characters who are imperfect and three-dimensionally drawn. I was reminded of the novels of Graham Greene in both the manner in which the story unfolds and the realistic characterizations of the people involved. Ostensibly this is a book about Diana’s decision, a decision that she made when she had neither the knowledge nor experience to make it, a decision that has dogged her every year of her life since she was fifteen. It takes her thirty years to comes to terms with that decision, but ultimately, you’re proud of her for how she handles it, and proud of her, too, for how she decides to move forward.

In a day in which Caitlyn Jenner is gracing the front cover of Vanity Fair, transgender issues are at the forefront of the collective consciousness. We are entering an era of great social change, an era in which we are coming to acknowledge that trans people, like homosexuals, have little choice but to be who they are. What is so powerfully moving about Diana’s story is that it harkens back to an epoch before there was any tolerance at all for gender that was not one hundred percent “man” or one hundred percent “woman”; she demonstrates with painful yet not pitiful eloquence how difficult it can be merely to exist in a world in which one must identify oneself solely with one or the other, and ultimately, how we all suffer from trying to adhere to this strict dichotomy of gender. Hers is a coming-of-age story unlike many others, yet it cries out to be told, to join the stories of other youths who have suffered crises of sexual or gender identity in a world that has often been hostile to them. Yet, it, too, offers hope, for if, in the modern era, a forty-five-year-old woman can at last find peace, if a sixty-five-year-old woman can find peace, then perhaps the young people who follow in their footsteps will never have to know the suffering that the older generation endured; peace may be theirs without their having to find it.

3 thoughts on “Sugar and Snails”