I actually wrote this poem back in my mid-twenties, which, believe me, was more than a few years ago, so it’s pretty amazing I still had it lying around. I’d been through a few boyfriends by then and had really started thinking about what it was that I find attractive in a man. I guess I already knew that I wasn’t unduly impressed by appearances – I mean, I’ve never understood why I should get all hot and bothered by chiseled features or a cleft chin – but it was only then that I started to understand what it was that I did find appealing in members of the opposite sex. And the answers, frankly, rather surprised me. Because it turned out that, like the rest of us, I’m inexplicably drawn to certain physical characteristics. They’re just not, perhaps, the typical ones.

Glasses, for instance. Warm, expressive eyes are a must for me in a man, but there’s no question that I prefer them framed by a pair of lenses. Don’t ask me why; I can’t even begin to guess. Brunettes over blondes, although I did have a huge crush on a redhead a while back, so who knows? I love an afro on a black man, but big hair on a white guy leaves me cold. I’m not partial to beards but I’m not offended by them either; mainly I just like the feel of not-quite-clean-shaven cheeks. Muscles are fine as long as they don’t get in the way of a nice round beer belly, and I never ever want to lay my head back against a set of six-pack abs. I feel safe enveloped in the long arms of a tall man, but I like seeing eye-to-eye with a short one, too. Thin may be pretty, and healthy, too, of course, but given my choice, I prefer a substantial man, one whose weight you can really feel on your body. And when I think about the wide variety of qualities I find appealing in men, it becomes clear to me how it all boils down. There’s something attractive in everyone. Sometimes you just have to look a little harder to see it.

Nobody really understands all of the nuances of what goes into physical attraction. How can you look at someone you know would not be considered attractive by most people and still think they’re the hottest thing walking? The bottom line is, when it comes to choosing a mate, what I really want is a man who looks nice, who looks kind; someone I’ll be happy to go to bed with every night and wake up with every morning; a man who’s a comfort to look at and to feel by my side. And maybe that’s not a feature you can pinpoint with characteristics and measurements; maybe it really is a quality that comes from within.

Or so they say up at Anderson Valley Brewing Company, where they host this annual event at the Mendocino County Fairgrounds.

Now I can’t say that Boonville is my favorite of the beer festivals I regularly attend. In fact, in my book, it pales by comparison to the festivals at The Bistro in Hayward, most notable of which are the Double IPA festival in February and the Wood-Aged festival in November. In terms of selection and style, these fests offer a larger variety of the kinds of beers I really, really like, and more importantly, they tend to feature a greater number of beers I simply don’t see in my regional market.

However, no local beer festival can match the power of Boonville for sheer good time. That’s because it’s not merely a beer festival; it’s a weekend-long party complete with camping, barbecuing, loud music, and vast numbers of otherwise quiet, sober people generally making drunken asses of themselves. Not me, of course, because to the best of my recollection I have never, ever made a fool of myself, and I’m quite certain that all of the stories concerning my behavior during my rare nights of overindulging have been entirely fabricated.

I won’t regale you with noteworthy tales of prior Boonvilles, many of which are incredibly embarrassing either to me personally or to people dear to my heart, but here are a few of the life-changing observations I made at this year’s festival:

Bright, sunny and ninety-five is way better than rainy, muddy, and fifty-five, especially when your friends who arrive first are smart enough and early enough to pick out a shady camping site.
A wise woman drinks beer with breakfast, not before.
Patience is a virtue that women develop while waiting in line for the “real” bathroom when the Port-A-Potties are full.
Patience is a virtue that men develop while waiting for women to emerge from the “real” bathroom.
A man who is so anxious to get a beer that he shoves a woman out of his way has no right to complain when she shoves back. Not even if, in so doing, she spills said beer.
A true friend is someone who waits with you in the line for the Port-A-Potty just to be able to hold your beer while you’re in there.
Plastic cups don’t break with the same joyful ringing clarity as glass ones, but at least no one loses an eye.
It’s rarely worth standing in the long line for that special beer that some brewery always decides to put on exactly at four o’clock, but you’ll be sorry if you don’t do it anyway.
You can’t appreciate really good beer until you have some bad ones.
Caterpillars do not improve the flavor of tenderloin.
Just because there’s a bridge doesn’t mean there’s anything special on the other side of it.
Dancing on the roof of an RV does not make you look foolish. Dancing unenthusiastically does.
Friends are people who can drink with you all weekend and still like you afterwards.
Blessed are they who for once find a quiet camping spot and don’t have to listen to those #$^@&$! jerks screaming and running around all night.
Everyone looks like crap the morning after a beer festival, either because they drank too much or because you did.
Choose your first three beers well; by the end of the festival, they will be the only ones you remember.

My essay “To All the Penises I’ve Ever Known”” has been published in The Pittsburgh Flash Fiction Gazette. (Note: Although the story is not overly explicit, the Gazette contains adult content).

This “open letter” was one of the first short pieces I wrote after deciding to become a writer. Of course, once I’d written it, I had no idea what to do with it. Clearly it wasn’t a story for the literary journals – although I did try a few. It was too graphic for most online magazines, and not graphic enough for “adult” sites. Then I happened to stumble across The Pittsburgh Flash Fiction Gazette. Featured on its front page were a flash fiction story and a handful of naked ladies. That, I knew then, was the right market for this piece.

Sexuality can be a difficult subject to tackle, and it’s something I’ve struggled a lot with in my books. Not because I’m uncomfortable writing about it, but because sex in literature is often relegated to the realms of pornography or erotica, and my work, while often sexually explicit, rarely falls neatly into either of those categories. Sex in writing does not have to be all about titillation. It doesn’t have to be all about arousal and consummation, nor about the quest for some idealized partner and the ever-elusive simultaneous orgasm. It doesn’t even have to be dramatic. It can be stupid. It can be funny. Why not? Sex makes us stupid and funny. There are many ways of exploring sexuality, that endlessly fascinating aspect of our lives as human beings. “To All the Penises I’ve Ever Known” was one of mine. 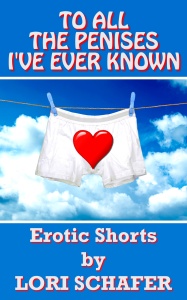 Would you like to be notified when I have a new release? Please sign up for my newsletter.