Needless to say, it takes careful planning to prepare for several weeks of life on the road. As it happens, I drive a pickup truck – a 2011 Ford Ranger – one of the last ones ever made. Why Ford stopped making them, I can’t even guess, because it’s a great little truck. I bought my first one used back in 1998, and have been driving one ever since. In fact, this is my fourth. That green camper shell you’ll see below has been moved twice already! I must say it goes better with the gray than it did with the white.

Anyway, after running away from home in a station wagon – which was not the most comfortable vehicle to live in, although not the worst, either – I learned my lesson and upgraded to larger vehicles. There was, of course, my old ’69 Dodge, which will forever remain in my heart as my ultimate favorite (no offense, Ranger!). I loved that van so much that when its drive shaft broke somewhere in Illinois back in 1997, I had one custom-crafted at a machine shop to the tune of a thousand dollars – which was a giant pile of money for me in those days and, in fact, still is.

But alas, the day finally came when the van needed a part that no junkyard in New England could supply, and I had to face facts – the van was dead. I wept without shame when they hauled it away. I still weep when I remember the day.

The Rangers, however, have been great. They’re small trucks, so it’s no struggle getting in and out of them, no problem parking, and, since I switched to the four-cylinder, the gas mileage is pretty decent, too – 20 to 22 city and up to 30 mpg highway. And you sure couldn’t beat the price tag – this one I bought for a mere $13K. Thirteen thousand dollars for a brand new truck! Where are you going to find a price like that anymore? Of course, it’s easier when you don’t care about the bells and whistles. My windows roll down with a handle. My doors unlock with a key. My steering operates with arm muscles, as does my transmission. I’m all manual, baby!

And although I don’t take road trips much anymore, I have found it comforting, these last couple of decades, to own a vehicle that’s good for travelling – just in case. And here we are at last – case.

However, somewhere in my memory – my last major road trip was in 2003 – I suppose I must have re-worked my perception of just how much space is really in the back of this truck. Looks plenty roomy, doesn’t it?

Of course, once you add the microfiber top for me to lie on (somehow my hips are not quite as tolerant of the flatbed as they used to be), and a couple of comforters for the cold nights that will come later in the season, half of that space is gone. 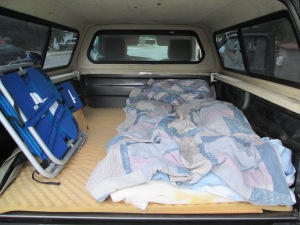 Now back when I was a professional eBay seller specializing in rare and out-of-print videos, and spent months on the road each year buying inventory, I used to actually build the bed on top of video boxes. Really. I assembled a collection of uniformly sized boxes from distributors – they were about 2′ by 1′, as I recall – filled them with videotapes, and laid down right on top of them. Once I bought so much inventory that I even tried a second layer, but that was a bit claustrophobic for my taste, and I ended up spending my last few nights sleeping in my front seat, which, I confess, truly, truly stunk. Not this time, though, because my passenger seat is packed tight, and this is before I even set up my computer and other equipment:

Needless to say, I had to do some re-packing before I could actually lie down that first night in the truck.

I made it work for that one night, but boy, what a hassle! After a couple of days I realized that while my packing system was very logical – I’d naturally packed “like with like” – it was not really the most efficient use of space. It made far more sense to build the lower layer of my luggage out of stuff I needed less often – such as my spare books and warm clothes – than to insist on keeping them where, in my sense of organization, they “ought” to go. It was with great sadness that I ultimately decided that surface repacking was not going to solve the problem, and instead I ended up emptying the whole truck and starting over. It was hours of work, but I’ve been much happier with the results, although it is still pretty crowded, as you can see here:

Next time I’ll share the view of the cab with all of my modern conveniences assembled around me. Feel free to take a sneak peek via my new YouTube channel here: https://www.youtube.com/channel/UCb5RugrJMSHh6_4hkgHmkMA. Just please don’t cry over my less-than-professional cinematography. I’m getting better, I swear!