Some time ago, I decided it might be fun to start doing reviews of contemporary authors’ work. This is actually kind of a stretch for me because 1) I acquire most of my books used for $2/bag at my local library’s twice-annual sale and 2) It’s rare for me to read a book that’s less than ten or twenty years old. However, I see so many free e-book promotions on Twitter nowadays that it seems a shame not to read some more modern works, and in addition, I thought it would be the best way to get a handle on what’s happening in the indie author community.

The only problem is, most of the books I’ve acquired so far – how can I say this politely – stink. It turns out that there are, in fact, some solid reasons why indie authors don’t get the respect that traditionally published ones do, and it’s precisely because so much of the work that’s being released is so poorly done. It’s not just bad writing; I’ve begun books that were so rife with grammatical and spelling errors that they made me want to contact the authors and beg them to let me edit their work just so no one else on the planet would ever have to be exposed to such abominable English. Oftentimes you can see the beginnings of a good story, but the mechanics simply aren’t there to support it. And to me, I don’t care how great the plot is – if it’s torture for me to try to muddle my way through the bad language, I’m not going to force myself to keep reading. And it makes me very sad just how many of these books I’ve had to stop reading.

Hyperbole by Ryan Parmenter is the exception. An exception, and a truly exceptional work. Here is a book that is so professional, on every level, that it is virtually indistinguishable from a traditionally published book. Indeed, any publisher should have been honored to print it.

I don’t know why Parmenter chose to go the indie route instead. Perhaps he suffered the usual indignities heaped upon debut authors seeking publication, or perhaps, like me, he simply tired of all the waiting. What I do know is that Hyperbole has moved on to the second round for Amazon’s Breakthrough Novel Award. And having read the book, I can tell you that this doesn’t surprise me in the least.

Parmenter has dubbed his novel “the most violent comedy since The Bible.” While this description does not do it justice, it does paint a very accurate picture of the author’s satirical and incredibly witty sense of humor, which prevails throughout the book. There are countless passages that are so well-written, so brutally clever, that there were times in which I was jealous, actually envious that he wrote them and I didn’t. And that is perhaps the greatest compliment one author can pay to another.

Don’t get me wrong. Although there are moments that will make you laugh out loud, the book has its dark side, too, and a very dark one it is. Hyperbole takes place in the aftermath of the tragedy of “7/11,” in which Washington D.C. was obliterated, leaving a tremendous vacuum not just in the government, but in the lives of everyday Americans. The results of this catastrophe? A group of characters who might best be described as “slackers,” youngish people who lack drive or purpose and spend a great deal of time getting high. Indeed, whether it was intentional or not, there’s a definite Generation X/Y sensibility about the book. It reminded me quite forcibly of my own youth, in which many of us never bothered to make long-term plans because we figured that with the Cold War and all, the world was going to end before we grew up anyway. Imagine our surprise when the Soviet Union broke up and we suddenly had to find something to do for the next several decades, and you’ll understand how lost the characters in the novel feel in their own meaningless lives.

Yet they do find meaning. In strange, circuitous, unexpected ways, Harland and his friends somehow manage to do something, to contribute something to their vastly altered universe. And although they ultimately fail to accomplish their intended goal, such as it is, in the end what matters is that they make the effort. They find a reason to be, to continue to be. And that, it turns out, is enough.

Some readers might not enjoy Hyperbole. They may not appreciate the often dark sense of humor, or they may be offended by the rampant pot smoking, or they may not even care for the somewhat roundabout path by which the plot and the fate of the characters unfolds. But those readers will be the exception. And even to them I say, give it a try. Whether you like it or not, it’s an important book and it’s worth reading, even if it’s only to see, to feel what many people in this country are feeling. To understand the apathy and hopelessness of our generation, to comprehend how we, too, are struggling to find meaning. And most importantly, to recognize, as Hyperbole does, that the choice of who we want to be, of how we want to live, is ultimately ours. We merely must choose to make it.

It’s not a book for everyone. But everyone should read it. 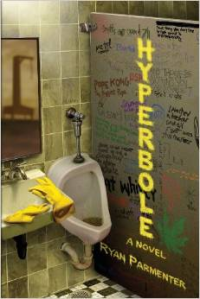