Today is my last day in South Dakota. I spent a surprising amount of time in South Dakota! Or perhaps it merely feels that way because there was so much to write about. I say “was,” but in truth, I’m not done yet. So here, in random order, are my final observations on the state of South Dakota.

1) South Dakota has a neat yet rather depressing twist on the roadside crosses people sometimes put up to mark the scenes of accidents. All along the highways – fortunately not too frequently – you find these government-sponsored signs at the sites of highway fatalities:

The program was put into place in 1979 in order to raise awareness of the dangers of drunk driving, which evidently accounts for half of the sign placements(http://dps.sd.gov/enforcement/accident_records/think_sign_information.aspx).

“Think! Why die?” Crude sentiments, perhaps, but they get the job done. I’m inclined to believe that rush hour would be a lot safer back home if they threw up a sign every time someone was killed on a freeway. It would be sobering indeed to see how quickly we run out of room on our medians.

(Note: I’ve since discovered that Montana maintains a similar program through its American Legion, which makes me wonder how many other states employ a system like this. I really think it’s a great idea that should be more widely adopted.)

2) The cows in South Dakota – of which there are many – are really smart. These ones were intelligent enough to find the only shade in a seemingly endless open pasture and find respite en masse from the ninety-degree heat, although I have to think the “outliers” must be quite low in the cattle caste:

South Dakota cattle are also very romantic. Just listen to this one, who decided to serenade me to sleep with his sweet, sweet song. (Fonzie says to take two “cool” points if you watch all two minutes of my cows-walking-around video – Heyyy!)

3) Towns in South Dakota really know how to party. Take the town of Mitchell (population 15,000), best known for a structure called the Corn Palace.

“Corn Palace!” I hear you exclaiming.

“That’s right, the Corn Palace!” I exclaim right back.

I must confess, though, I was a bit disappointed with the building once I found it. I mean, I expected a giant palace made out of corn, something along the lines of a story from the Arabian Nights, didn’t you? Unfortunately, it isn’t as “corny” as it sounds! Ha ha ha! (Oh yes, I’m laughing, but you don’t have to. In fact, please don’t – it will make me worry about you.) No, instead, it’s the civic auditorium, where concerts and such are held. However, it is profusely decorated with corn and corn products inside and out, which must guarantee that if you perform there, you’ll have lots of folks lending you an “ear” (hee hee hee): 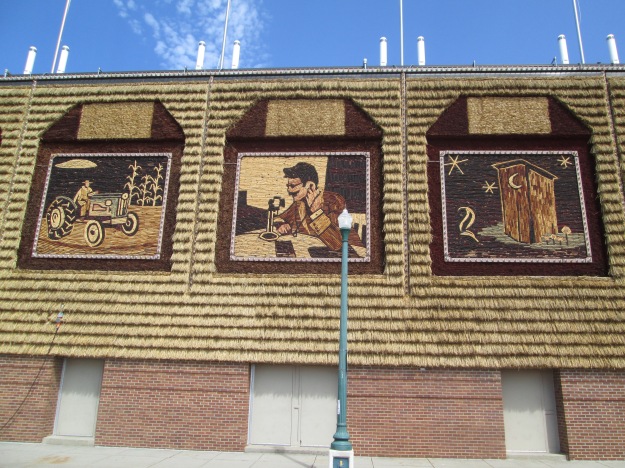 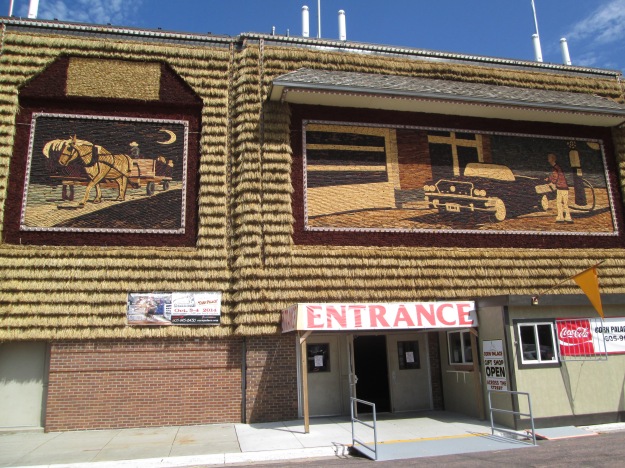 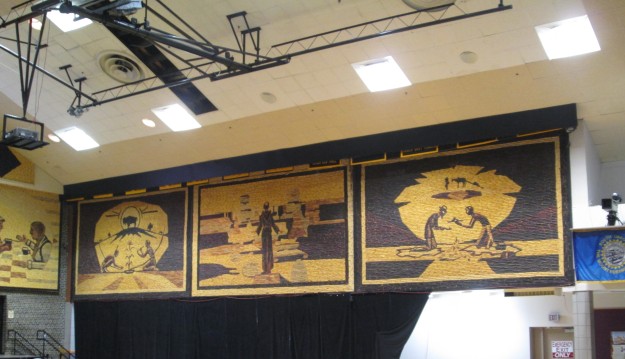 Oh, yeah, and I nearly forgot to mention it, but right outside the Corn Palace, they had set up a street fair. Not your ordinary street fair, mind, but a full amusement park right in the middle of Main Street, complete with rides for kids… 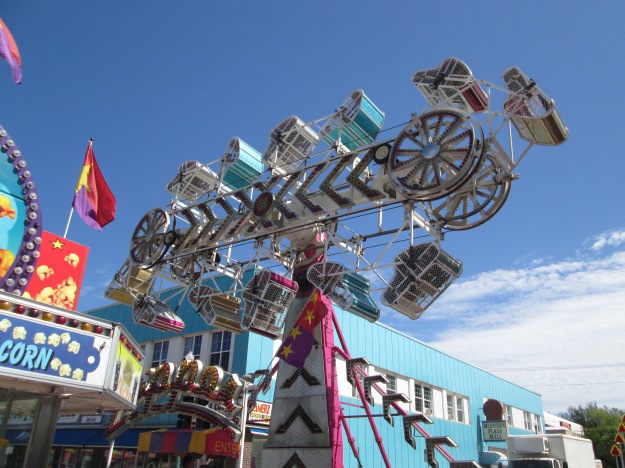 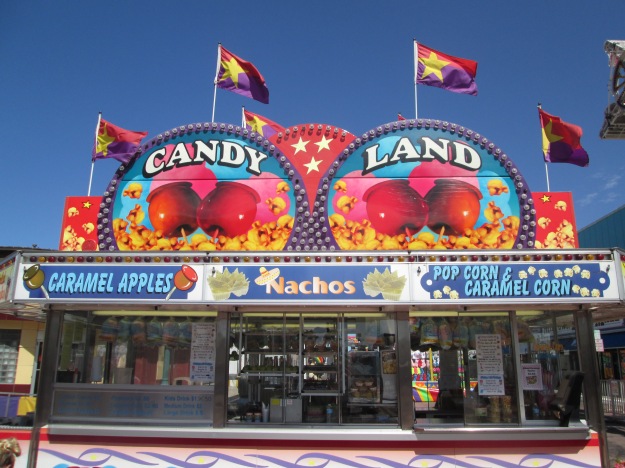 …even a Ferris wheel that towered over the nearby business buildings. Guess that’s one way to keep an eye on what’s really going down on those upper floors!

4) South Dakota doesn’t only know how to advertise; it knows how to deliver. There are probably a good twenty billboards on the interstate guiding you to the Corn Palace. But that is nothing, nothing compared to the advertising campaign of Wall Drug. They must have more than a hundred billboards dotting the interstate east and west of the town of Wall – their campaign possibly even surpasses the tourist trap “South of the Border” in South Carolina – all of which proclaim, in nostalgic, old-time signage, the wonder and virtues of Wall Drug. This is a place that, according to their advertising, should have absolutely everything you can possibly imagine in the way of service and product, from picture-taking props to pottery to an apothecary shoppe to a do-it-yourself mining company. And once you get there, you discover that it actually does have all of those attractions, plus many, many more. How else would you fill up a building too big to fit in a single photo? 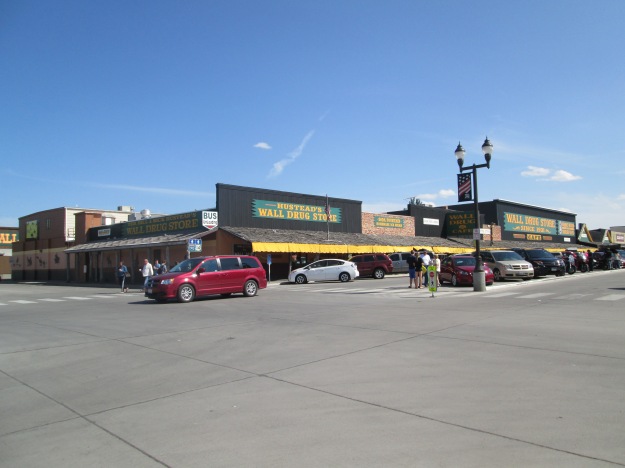 5) There’s one agricultural product that’s widely grown in South Dakota of which I was entirely unaware. Unaware, that is, until I began running across seemingly endless fields of them. So many, many sunflowers! Who knew?

6) South Dakota is one of the few places you can make this joke and have it make sense:

“Look! It’s a Little House on the Prairie!” 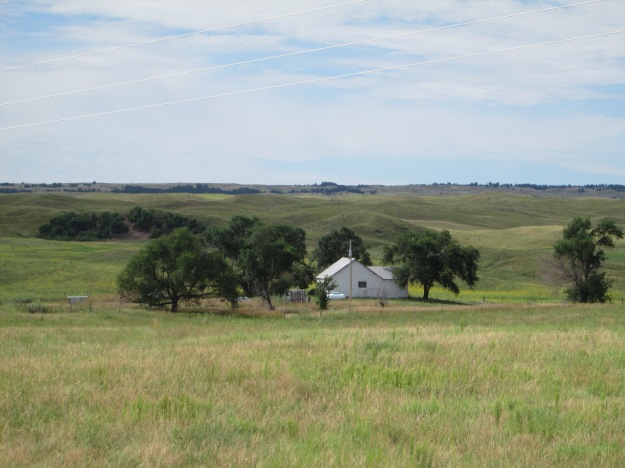 This is not, of course, the Little House of Laura Ingalls Wilder fame; that’s over in the modern SD town of De Smet, where the Ingalls family had the homestead that provided the setting for four of the Little House books. Still, there’s something inexpressibly charming about spotting these modern homesteads dotted about the landscape; you can almost imagine the residents churning butter by hand and stocking up on victuals for the long, harsh winter. Even now, it can’t be an easy life for those brave souls who decide to attempt it.

Tomorrow I will be in North Dakota, which I vividly recall being the buggiest state in the Union. Will it re-earn the title, or will it be supplanted by its southern relation, whose insects are, even now, so firmly encrusted upon my grill that a whole winter’s worth of California rain won’t wash them away? Can’t wait to find out – North Dakota, here I come!

If you would like to see more super-professional videos from my cross-country travels, please check out my new YouTube channel: https://www.youtube.com/channel/UCb5RugrJMSHh6_4hkgHmkMA.