The Kindle version of my award-winning memoir On Hearing of My Mother’s Death Six Years After It Happened: A Daughter’s Memoir of Mental Illness has been discounted to just $0.99 through Thursday, May 14th on Amazon.com.

It was the spring of 1989. I was sixteen years old, a junior in high school and an honors student. I had what every teenager wants: a stable family, a nice home in the suburbs, a great group of friends, big plans for my future, and no reason to believe that any of that would ever change.

Then came my mother’s psychosis.

I experienced first-hand the terror of watching someone I loved transform into a monster, the terror of discovering that I was to be her primary victim. For years I’ve lived with the sadness of knowing that she, too, was a helpless victim – a victim of a terrible disease that consumed and destroyed the strong and caring woman I had once called Mom.

My mother’s illness took everything. My family, my home, my friends, my future. A year and a half later I would be living alone on the street on the other side of the country, wondering whether I could even survive on my own.

But I did. That was how my mother – my real mother – raised me. To survive.

She, too, was a survivor. It wasn’t until last year that I learned that she had died – in 2007. No one will ever know her side of the story now. But perhaps, at last, it’s time for me to tell mine. 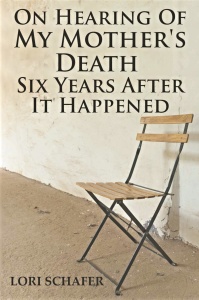 7 thoughts on “SALE! My Award-Winning Memoir On Hearing of My Mother’s Death Six Years After It Happened Just $0.99 through 05/14”