Recently I’ve been thinking a lot about biology and how it relates to human affairs. I think there’s a tendency among humans to believe that we are somehow special, unique in the animal kingdom, and perhaps in some ways we are. But there’s no doubt in my mind that however complex our brains, our bodies must still operate via the same mechanisms as those of the “lesser” animals – with chemical reactions, nerve signals, and so on. And the more I learn about what’s transpiring in the world of science, the more I suspect that psychology, as it is currently understood, no longer offers the best explanation for human behavior. Or, rather, that a person’s psychological makeup is not derived in any spiritual or subconscious way by the inner workings of the mysterious concept that we call “mind,” but by biological forces operating outside the level of our consciousness. In fact, the more I think about it, the more I suspect that human affairs are more biological than we give them credit for, and this study I read on Science Dailyseems to me a case in point.
The scientists found that juvenile mice secrete a pheromone in their tears that drastically reduces the sexual behavior of adult mice towards them, a “protective” shield, if you will, against mating activity from full-grown males. There are obvious reasons why, biologically speaking, it would be foolish for adult mice to try to mate with prepubescent mice, even supposing that mice are not subject to the same social strictures as humans.
But that got me to thinking. Clearly humans don’t have the same olfactory systems as mice. They do, however, have similarly well-founded biological objections to adult-juvenile pairings. Isn’t it therefore logical to suppose that people also have some as-yet-undiscovered mechanism that precludes adults from desiring intercourse with children? And if this is the case, wouldn’t it also be logical to propose that pedophiles, rather than being victims of psychological unbalance or damage, might instead be genetically defective – unable to perceive the signals that make the rest of us sick to our stomachs at the very thought of what gives them pleasure? And if this were true, is it even possible that pedophilia might turn out to be a treatable condition after all?
Of course, there’s a huge difference between people and mice. The study concludes that the pheromone makes it possible for the mice to discriminate in favor of full-grown partners. It doesn’t, however, offer any evidence that, in the absence of the pheromone, the mice will actually prefer juveniles, which I believe is what most human pedophiles do. For humans, therefore, it can’t simply be a matter of not receiving the “hands-off” signal when it comes to children. Is there another force at work here that we simply don’t understand? A chemical signal, perhaps, that the young exude and that is sexually irresistible to adults who are susceptible to it? It’s not so far-fetched. Look at new-baby smell – it’s clearly one of the many “cuteness” factors that make people want to take care of the little buggers. And think of how different the world could be if there were no sexual predators; if it were possible to simply shut off whatever triggers that lust within them. This, to me, would be an avenue worthy of scientific exploration.
Human sexuality is incredibly complex. And, as we’re learning more and more, so is the sexuality of other animals. People are into all kinds of crazy sexual behaviors that seem to have nothing to do with reproduction. But maybe that isn’t the case at all. Maybe we, as humans, simply haven’t yet figured out the “why” of those things we call pleasurable; maybe, at bottom, there’s some biological sense to them after all. 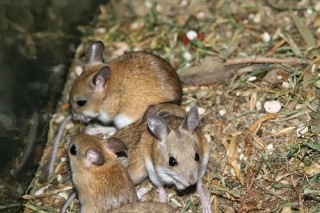