http://www.vineleavesliteraryjournal.com/issue-06-apr-2013.html
I originally wrote this piece in an effort to create an ultra-short of 150 words or less. I don’t recall what prompted it, but somehow I got to thinking of my biological father and the very few memories I have of him, which, interestingly enough, taken all together, come out to about 150 words!

The second segment is about the father of the best friend I had from the time I was four or five until we moved to a different town when I was twelve. In the hundreds of times I visited my friend’s house – which was just across the street from ours – I don’t believe I actually saw the man more than a dozen times, and never once in all those years did he speak to me. Of course, most of the time he was busy working his butt off to support their five children, and there was no doubt that he loved his family very much. But as a kid all I was cognizant of was the fear.

I wrote another segment of this piece about my “main” stepfather – that’s the one I had the longest – but I didn’t really care for the way it turned out so I omitted it. I’m still not sure if I should have included it after all. It certainly would have put a different spin on the piece as a whole, because it was a fairly flattering portrayal of a man who, without being anyone’s biological father, was nonetheless the best father I ever had. Except that in the end, when the marriage dissolves, the stepdad moves away and is never heard from again, and my intent was to make the story evocative rather than melancholy. And at bottom, I think it makes for a better “vignette” without coming to such a resounding conclusion, and that’s what Vine Leaves does best. 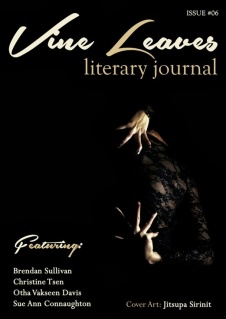